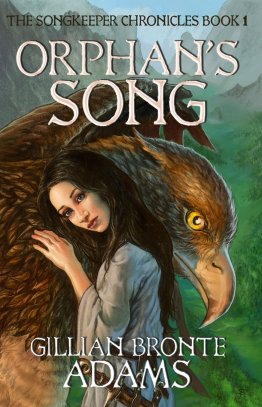 Even newcomers to the fantasy genre bring some experience with them.  We’ve been awash in fairy tales since before we could understand language.  We all know Narnia, or at least a Narnia, some other world, both like and unlike our own, in which our imagination can stretch its legs.  And there’s a definite value to revisiting those tropes, returning to the Lamp Post in the woods as for the first time.

When I picked up Orphan’s Song, book one of The Songkeeper Chronicles by Gillian Bronte Adams, I thought that’s what I was getting into.  I was soon pleasantly disillusioned.

Orphan’s Song starts a bit routine: We have Birdie, our main character, a mistreated, orphaned girl with a mystical gift and a secret protector.  We know these themes.  We settle into the pages like a familiar blanket.  Helping is the novel’s classic, friendly style.  Orphan’s Song reads a bit like Lewis or even George MacDonald.  It wears the cloak of a fairy tale.  Adams even dishes out a phonetic accent or two, a technique MacDonald loved.

Within a chapter we find ourselves in a bear trap.

As the conflict grows, characters introduced to us as common, classical forms soon grow into knotworks of modern complexity and dilemma.  They abandon their tropes and cling instead to a refreshing and different path: realism.

They feel anguish, fear, and confusion, just as we would if we were captured by a dark, evil knight.  Hungry and destitute, they steal food.  They seek to escape their bloody pasts.  War takes its casualties.  Power terrifies.

Nor are Birdie and our other heroes, Amos and Ky, the only compelling characters.  Carhartan, the chief antagonist, has a history and reasons of his own.  And his boss, a monarch known only as the Takhran…  I won’t ruin it except to say that we only meet him once, and it’s one of the most memorable and unsettling scenes in the book.

Adams turns the genre on its head, subverting our preconceptions.  We think we can trust Orphan’s Song as a harmless, children’s fairy tale, but we’re quickly bound to something more gritty and perilous.  No, the book is not harmless.  Because harmless books aren’t worth reading.

Instead we find ourselves feverishly flipping pages, desperate to find out how Birdie, Ky, and Amos will get themselves out of their mess.  I hadn’t prepared to stay up so late.

Flowing beneath the narrative like an underground river is the Song, a mystical force that begins to shape Birdie’s world.  Adams’ ambiguity toward the Song’s nature is one of the book’s finest virtues.  Adams is a Christian, and though this comes mildly through in broader themes, she doesn’t do the Christian Thing with magic.

You know what I’m talking about.  Often in fantasy written by Christians, magic is pulled from one of two drawers.  Either it’s evil and terrifying, the weapon of an enemy who has tapped into the power of hell; or it’s kind and safe, the supernatural reflection of a benevolent God.  But could mystical power be both good and terrifying?  As Orphan’s Song progresses and we learn more about the Song, we’re reminded again of Narnia.  Aslan is not a tame lion.  Many Christian authors miss an opportunity to enthrall with the sheer mystery and strangeness of God.  Adams does not.

She excels at setting, too.  The book is not long, but it sees Birdie and her friends take a sweeping journey through forests and over mountains, into and under cities, and across deserts and seas, sampling the wide land of Leira at a steady pace.  And though no one at the publishing house saw fit to grace us with a map in this edition, I didn’t find myself needing one, surfing instead on Adams’ keen description.

A couple of years ago, a Toyota tuning company created a custom Camry.  On the outside, it looked like a normal, beige, commuter car.  But under the familiar skin was the frame and engine of a competition drag racer, complete with 900 horsepower.

Orphan’s Song reminded me of the Sleeper Camry.  Adams offers us a ride home, and as we approach the Camry, we feel safe.  This is familiar territory.  “My aunt has one of these,” we think.  We know how this will end.  But when open the door and we find something very different.  Accept the ride and we’ll discover a very different experience, indeed.  We might not even be going home.  And this is what we’re really looking for in a fantasy novel.

It’s not perfect.  There are some structural shortcomings that could have improved tension and pacing.  Adams is also fond of the adjective, common among new authors, and often, if there are three nouns in a sentence, we hurdle three adjectives to read them all.

Yet as the story blooms, we find ourselves ever more merciful toward these slight shortcomings.  They’re easy enough to ignore amidst the transportive description, relentless action, and mysterious setting.  There: three adjectives and you didn’t even notice.

Book two of The Songkeeper Chronicles is due out in the spring, though I really think it needs to be today.  I need to find out what happens.

Grab your copy of Orphan’s Song on Amazon.