How Far Will He Go? How Long Will I Care?

Speculative fiction TV is a bit of a wasteland these days, isn’t it? Every once in a while you’ll find the odd gem, but the average show has a flashing neon sign over the door that reads “Action!” Then, once you get inside, it’s just the DMV. You’re forced to sit through hours of boring, extraneous dialogue and forced drama for just a minute of superpowers or a badly choreographed swordfight.

For years these shows compensated for their lack of budget with awful special effects, hilariously silly costumes, and styrofoam sets. But there was plenty of action. Plenty of what we nerds want. Then someone figured out that studios could put more money into the action scenes and special effects their characters spent 90% of each episode standing around, talking, and pondering moral dilemmas. (I’m looking at you, Marvel Netflix shows.)

That’s why I was pleasantly surprised when I started watching Knightfall, the History Channel’s Dan Brownesque take on The Knights Templar. 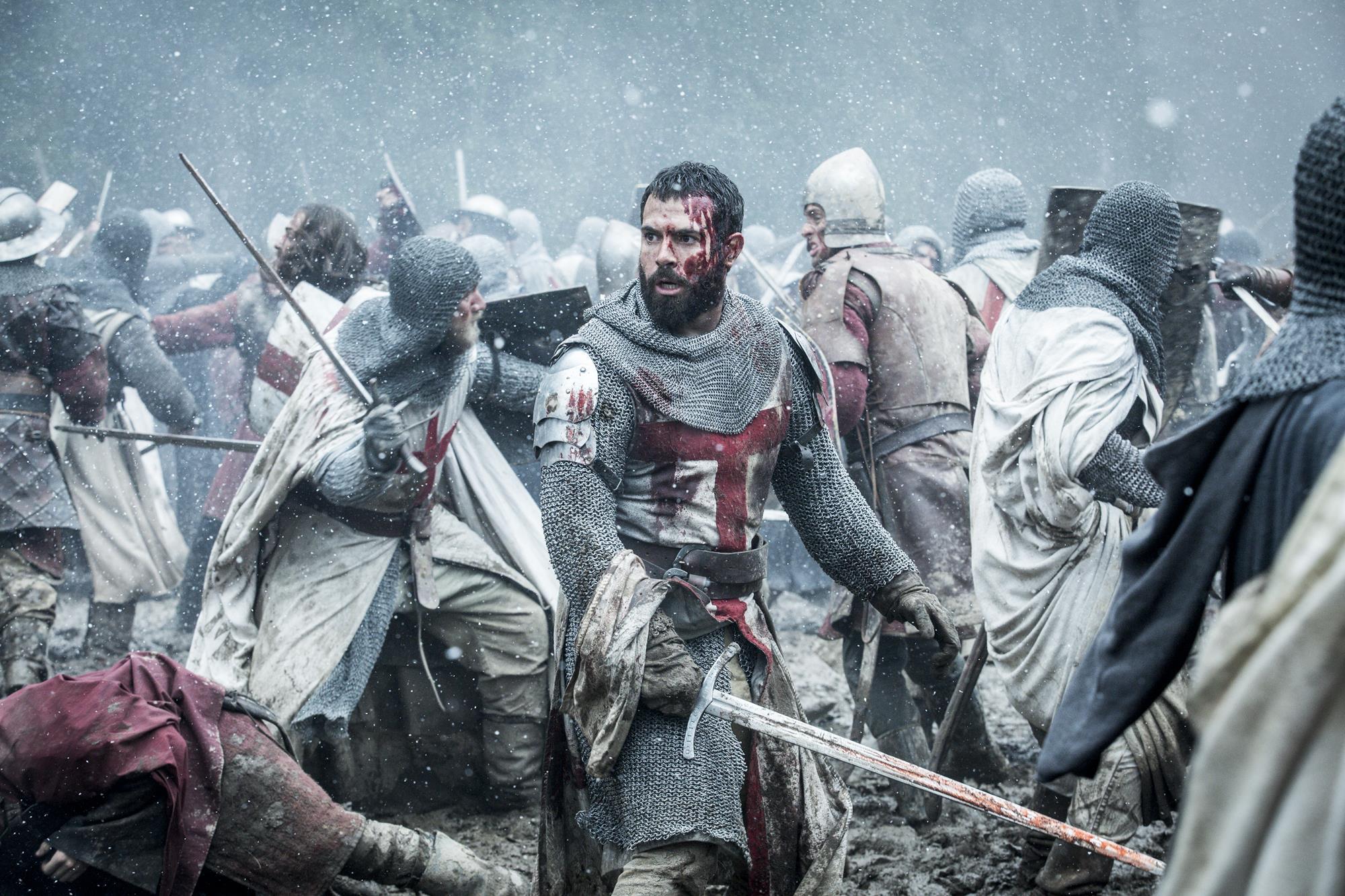 Knightfall‘s dialogue is a bit frank and expository, and the timeframes are confusingly compressed, but the production value is excellent. Costumes, props, and fight choreography are all very believable. I’m extremely impressed with the sets and locations. They must have filmed every medieval castle still standing in Europe, because these places look real. Even their composite aerial shots of 13th century Paris are more than adequate for TV.

And the writing gets off to a good start, too, with plenty of twists and sudden surprises. Landry, our main protagonist, suffers from self-doubt after his defeat at Acre in the Holy Land 15 years ago. He lost the Holy Grail in that battle, and he’s never forgiven himself. But he’s a man of honor, a devout Christian, and a faithful friend. His master, Godfrey, is a wise old mentor ready to hand over the reins of the Paris temple to Landry.

Spoilers off the port bow, guys. Look for the next divider line if you want to scroll past them.

Godfrey is murdered, but leaves behind a set of clues to find the Grail, and that’s when things really get interesting. Landry and his sidekicks, Gawain and Tancrede, both of whom are fleshed out and believable, must follow these breadcrumbs to look for the Cup of Christ. Very cool. Great nerd value.

Along the way they meet Parsifal, a young and naive farmer whom they invite to become a Templar initiate. He’s a bit of a loose cannon, but he has a good heart and clear motives.

We also have Phillip, King of France, who is oblivious to the people around him, and his manipulative advisor William De Nogaret, who most certainly is not.

The stage and players are set, but then the story starts to flounder. It turns out that Landry has broken his vows of celibacy and is having an affair with none other than Joan, Queen of France, wife of his friend the King.  *gasp*

Okay, good. We’ve established his character flaw. Now, I don’t think the writers see this as a character flaw. They’re pushing toward follow-your-heart, true-love-breaks-all-bonds nonsense. But we still see the negative consequences of Landry lying to his friends about it, and his actions have dire consequences for the Templars and France. So even if his flaws aren’t internal, he still has external problems. 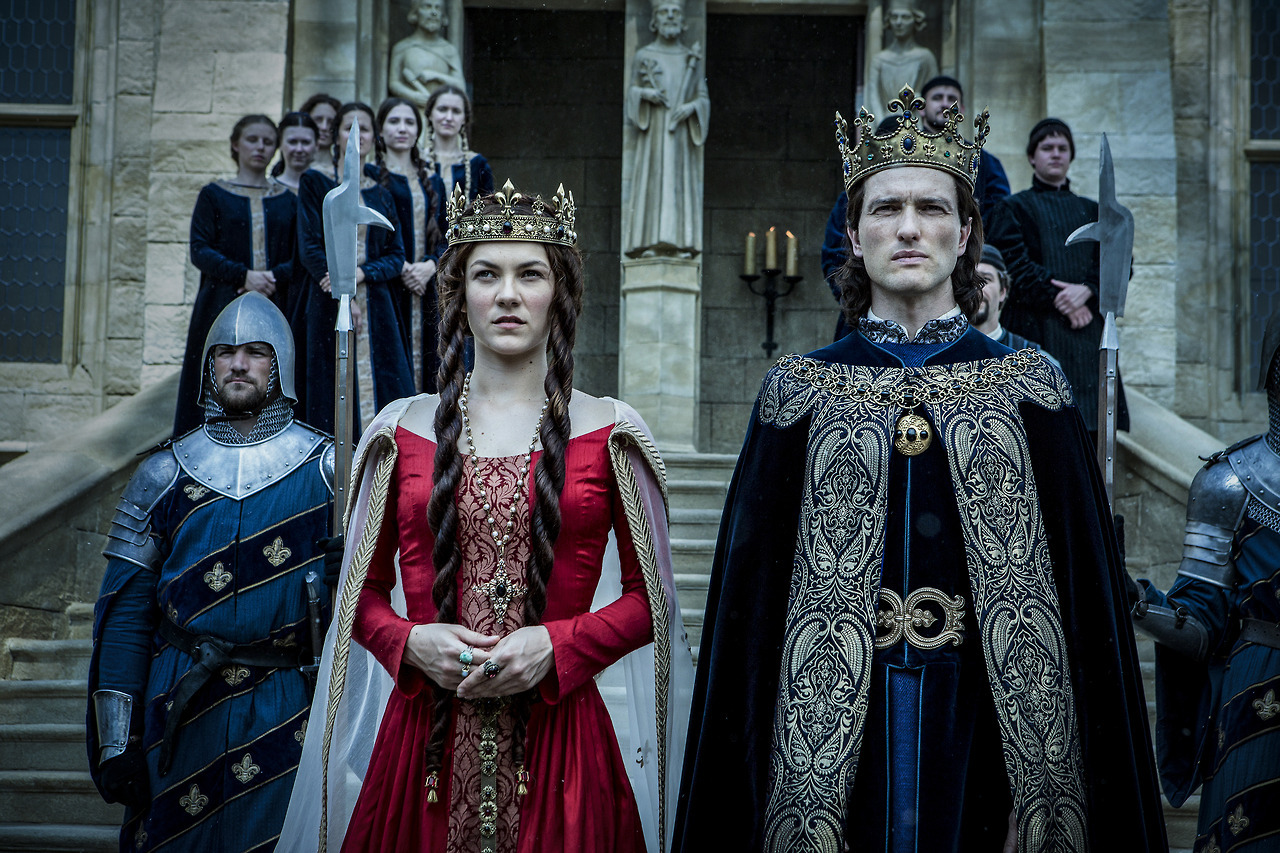 Throughout the series, Landry gets worse and worse. He lets his friends down. He makes impulsive decisions. He refuses to listen.

This wouldn’t be a problem for the show as a whole if I could transfer my support to someone else. But one by one, the supporting cast just keep doing awful things. Landry’s best friend tries to murder him. The fatherly, supportive Pope has people killed. King Phillip belittles those around him and constantly follows the carrot of De Nogaret’s slimy machinations. Even the young princess Isabelle schemes and plots to get her way.

Throughout all this, I thought young Parsifal would become my protagonist, the man I could cheer for. Yes, he murders someone out of revenge, but that’s only one flaw. He can be redeemed. Then he’s murdered.

All this has me wondering, why should I keep watching this show?

Landry & Co. have fallen victim to what I call “How Far Will He Go?” writing. Stories like this try to string the viewer along by showing a protagonist getting worse and worse, going down ever darkening paths until the end, when he’s finally faced with a choice that may earn him a little redemption in the eyes of the audience— or condemn him for good.

I think the whole idea took root with Breaking Bad, or maybe 24. I remember watching Jack Bauer hacksaw off a guy’s head so he could pretend to be a villain in season 2 of 24. “Oh, there’s no coming back from this,” I thought. Then I spent another 6 seasons thinking the same thing, over and over until it was trite and predictable.

See, there’s nothing wrong with establishing character flaws. In fact, it’s absolutely essential. We don’t want our characters to be perfect angels because we can’t relate to angels.

But there’s a difference between a flawed protagonist and a terrible person who happens to get plenty of screen time. Once “How Far Will He Go?” sets in, we’ll ultimately come to a point where we stop relating to that character. We stop overlooking those flaws because they’re far so beyond what we would ever do.

The worst part is, it’s easy. Instead of writing characters to learn and grow, storytellers can always make them do something more desperate and heinous than before. It’s a dial that just keeps turning. Ostensibly this is interesting to an audience who once supported these characters.

But what many writers fail to understand, especially about the speculative fiction genre, is that the audience needs themes. We need to know what the story means to us. Cautionary tales only go so far. Eventually we must experience a story and let it positively impact our lives, inspiring us toward something greater. If we don’t have heroes, we won’t be heroes.

I recently wrote a thank you letter to Marvel Studios after their triumph of Endgame. In it I praised their ability to create well-rounded, relatable characters. Tony Stark is a perfect example. Some wonder what ever happened to his alcoholism from Iron Man 2. Well, he overcame it. Just like he overcame a little of his blind pride in the first movie, and his crushing PTSD in the third.

Throughout his 11-year arc, Tony faced several different problems, confronting different flaws. In each episode, he finds a way to overcome one and emerges triumphant. (His internal victories always affect his external struggles, which is key.) That’s good writing, and therefore we love Tony Stark.

Conversely, having a character make the same bad decisions over and over not only alienates the audience, it abandons the importance of compelling, redemptive themes, and eventually we just stop caring. We stop hoping for that character because the story itself doesn’t cultivate hope.

So writers, especially TV writers, give your characters flaws. But don’t let those flaws be your only tactic for creating a compelling story. Take a risk, put some work in, and write some heroes.

4 Responses to How Far Will He Go? How Long Will I Care?